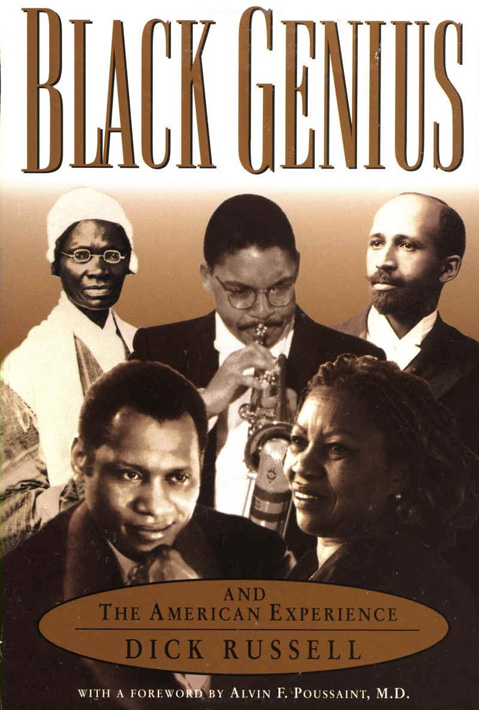 In September 2009, I received this Email from a friend, a published poet who lives in Italy. She writes so eloquently, and her words touched me so much, that I wanted to share it with others. – Dick Russell

Illuminating the colorblind beauty of genius

When Dick Russell started researching his new book, “Black Genius,” intended as a celebration of African-American achievements in fields ranging from the arts to science, the prospect of poring over biographies of his subjects and digging out secondhand interviews made it seem, he acknowledged, “like a pretty dry project.”

“Finally,” Russell said, “I decided I had to go out and meet people and do interviews.” And that’s when the project started to come alive…

In this collection of essays and interviews journalist Dick Russell examines the role of African Americans through two centuries of American history. He focuses primarily on the role of blacks in the cultural life of the United States. Russell writes about notable figures such as educator Mary McLeod Bethune, speaks with Harvard professor Cornel West about W. E. B. Du Bois, and discusses Frederick Douglass and James Baldwin in an essay titled “Timeless Voices, Parallel Realities.” Black Genius and the American Experience, with an introduction by Alvin F. Poussaint, takes a thoughtful and fascinating look at the contributions to U.S. history made by Americans of African descent.

“What is passed from one generation to the next” is the organizing principle of this study of several dozen African Americans in a wide range of fields. Russell supplements solid research with interviews of his living subjects (and friends and descendants of other twentieth-century subjects), which gives many of the chapters the tone of a memoir. But connections are the key to Russell’s analysis; his text and photographs trace Duke Ellington’s debt to Will Marion Cook, the line from Ellington and Armstrong to Wynton Marsalis, what Marsalis learned from Albert Murray, and Murray’s friendships with Ralph Ellison and artist Romare Bearden (and that’s just part 1). Part 2 consists of a look at creative ancestors and heirs in art, education, theater, philosophy, and literature; part 3 holds studies of cross-generational genius in science, invention, mathematics, and architecture; and part 4 focuses on healers (physicians and health activists as well as visionary leaders of the civil rights struggle). Valuable for its oral-history component and for celebrating the communal contribution to the achievements of even the most independent geniuses.

Buy Horsemen of the Apocalypse on Amazon